What It Means To Be Non-Binary 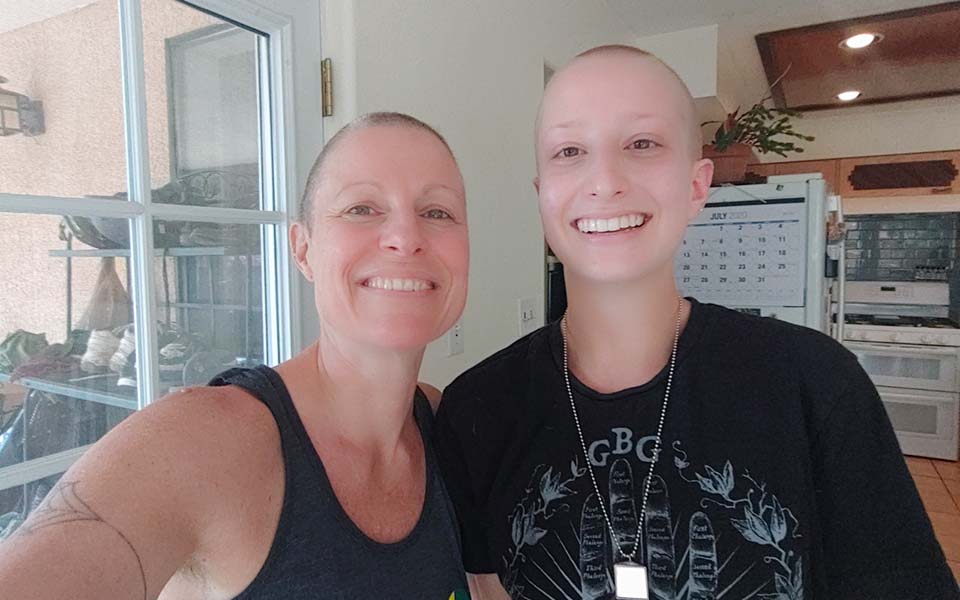 Last year my best friend told me by phone that my niece AnaMaria had started to use “they/them” pronouns. She said they might call me at some point to tell me more about it.

I texted on and off with my niece as we often would but no mention of it. I figured when the time was right they’d tell me more about it.

After sheltering in place for months in Los Angeles I decided I wanted to spend time with my chosen family. I called my BFF and told her I wanted to come this summer to see her and her two children (whose births I attended) and her partner, also my dear friend of well over 25 years.

A week or two after I arrived, I had a chance to sit with my niece and ask about their pronouns.

RELATED: I Was Terrified the First Time I Went to a Lesbian Bar

All that was needed was an open-ended prompt and they had a lot to say about what it meant to them. I knew they had struggled around puberty, and like another transgender member of my family, making the connections around gender answered so many questions.

People are often asking me about various gender terms and what “non-binary” means. I thought you might like to hear from my nibling (the name for a non-binary niece/nephew) directly. They have a lot to say and there is so much we get to learn from Gen Z. So much is expanding about how we look at gender and their generation is leading the way.

What made you come to the conclusion that you wanted to use they/them pronouns and what does that mean in terms of your own gender identity?

I just remember having a lot of disconnect with my female peers really consistently and not sharing the same experiences or the same opinions about things. So for the longest time I wasn’t even able to pinpoint that it was my gender that was creating this divide for me.

I saw this National Geographic article and it was all about gender and there’s just one page where there were all these different people of different identities and I was just like whoah! There are other things out there! And so that just kinda’ sat and marinated in my mind for a long time.

For awhile after that, I was like, oh that’s super cool, like I admire them, but that’s not me, is it? And then as time went on, I considered it more and more and so many of these past life experiences would really explain that. So I just went back in my head and remembered all these times I felt this disconnect. And from there I thought how can I be sure? Maybe I’m trying to be special or to get attention. But that was definitely not the case.

From there, I decided to just try using neutral pronouns with myself and see how I felt about that and just not saying it out loud but just in my head, treating myself as if I were non-binary and as if I were using they/them pronouns. And that really shifted my view, cuz I was like wow, this feels a lot better. Why did I ever consider that I might go by she/her?

I hadn’t realized until I knew there was an option how uncomfortable that made me. So it was just this gradual year-long thing of me being like oh, well, that couldn’t be me. I’m just a regular cis woman. But as time went on, I realized that even though I thought I could probably pass my whole life as a woman, I wouldn’t want to do that cuz it wouldn’t ultimately make me happy.

RELATED: The Trans* Movement: An Opportunity for All of Us To “Transition”

You talked about how you had several experiences that you looked back on where there was a disconnect. What were some of those moments of disconnect for you?

Most of them revolve around going through puberty because at a young age like 5th grade, I remember that girls at that time were getting their first bras and excited and we had to go to this class about using like pads and tampons and deodorant.

I just remember girls around me getting so excited. They’re like, “I’m getting curvy, I can’t wait to get my period and be a woman.”

When that actually happened for me, basically what happened was my mom came to me one morning and she was like “Hey you have to start wearing a bra cuz people can see your nipples through your shirt,” and she handed me this bra and I told her that I wouldn’t wear it. And she said “You have to wear this because it’s just not proper to go out into the world as a young girl without wearing a bra.”

I refused to, so I quite literally hid in my closet. I remember crying and crying, screaming and telling her “No no no, there’s no way that I’m wearing that. I’m not going to school wearing that.”

That day it took awhile into the morning and finally my mom let me wear an undershirt and I conceded and wore that instead. That was just an experience that no other cis girls that I’ve met to this day have experienced.

When I got my period for the first time, I hid it. For half a year, I didn’t tell anybody. I threw away all incriminating evidence. I tried to pretend it just didn’t exist and it wasn’t happening. So there were some of the more physical things like that where I had an immediate disgust and distaste and not wanting it to be real.

How would you define non-binary? What was it about that that you came to that conclusion as your own identity?

Overall, it’s anyone who doesn’t feel like they are part of the gender binary which at the current time is male and female. In the past that hasn’t been true though, in many societies.

Personally for me, I tend to fluctuate on the spectrum. So day-to-day, month-to-month I might feel more masculine or feminine but overall I don’t belong to one category of strictly male or strictly female. For me, being more androgynous and having that range to express the way that I feel inside with the switching from masculine or feminine or in between or maybe just not gendered at all. For me, it helps to have that more androgynous appearance.

What’s the conversation around sexuality and gender with your peers?

It’s not as complicated as a lot of people think it is because for the most part in the circles that I hang out with it’s because we all have the resources to educate ourselves and the majority of my friends have and it’s really easy to just tell someone this is who I am. “Okay cool anyways what class are you going to next?”

In the private school that I’m in, it’s a lot easier for people to exist as somebody who isn’t straight or isn’t or doesn’t identify with the gender binary so in my current situation that seems more easy, I haven’t seen a lot of outright hatred and backlash so far. I have to say, I haven’t met another non-binary person in my school yet. Whether they’re there or not, they’re not out.

I hope you feel great because it takes courage to just really be who you are in a world that’s very busy telling us who are supposed to be. That’s a hard thing to do and it’s actually not what most people do. Thank you.

Well I can tell you what’s happening right now. I’d say that even in these protests with what’s happening right now Gen Z is playing a major part and I wholeheartedly believe in our generation. I think that the majority of us are very progressive and we’re so sick of things being wrong and broken all the time that there were just going to have to pony up and do it ourselves.

So tackling things like climate change and ending racism, just elevating people to bring equality is a really hard task. It feels overwhelming sometimes that we have to fix every problem. We have to not only save our planet, but we have to save ourselves from each other.

It’s our turn. It is very scary sometimes. The most important thing we can do is build more compassion for each other and be able to communicate better. One of the worst things in this world are the people who excuse their own hate. We need to start taking accountability for that. It’s crunch time we’re up to bat. We are the shepherds of humanity right now.

I hope you are as inspired as I am.