Rosie the Riveter on Quarantine Moments 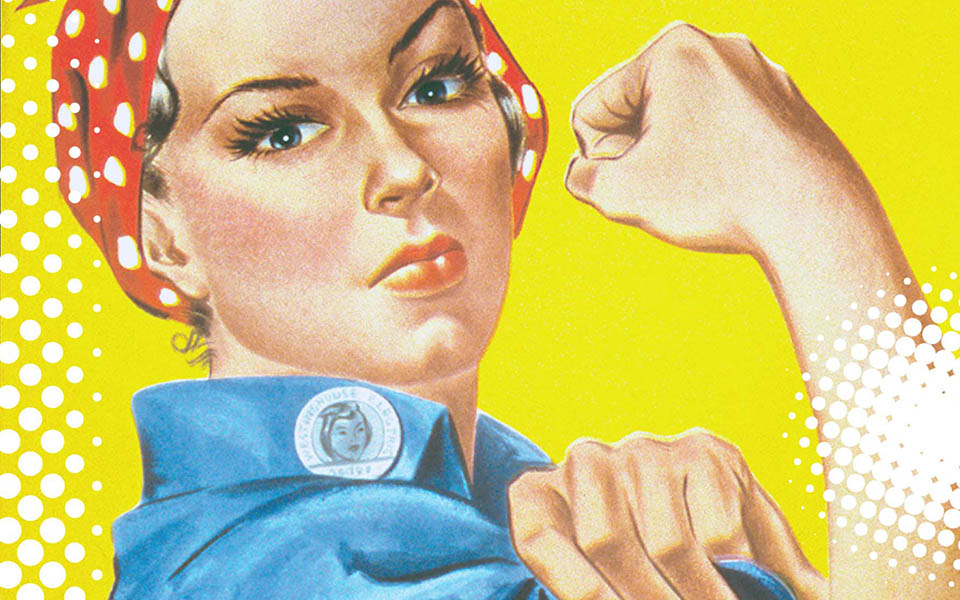 During WWII, as American men were needed for war with the Axis powers, who took up the slack at home? The same people who always do: women.

Women not only managed their households, they also began to work in defense factories and production, took on roles formerly only for men like becoming “conductorettes” on streetcars, even serving in the military. Actually, 350,000 women served in the war.

Rosie the Riveter became the iconic image of the woman who had stepped up and into her power to support the war effort, to fill in the gaps. The image was used to recruit women for these roles.

After the war was over, women wanted to keep their jobs and new roles. They had been able to make a livelihood and live a different kind of life, but as the men came back from the war, they clashed with the women and pushed most of them out again with the idea that work outside the home was for men.

Still to this day we have been working to have our rightful seat at the table and this moment as our world dramatically shifts is yet another moment when I believe women get to step up more than ever to lead because all of our systems are breaking down and showing us just how broken they are.

Who always sees and fills the gaps? We do.

We are being called into a much higher vision for ourselves right now.

We are being called to address what is broken and move into a new way of being in our world.

There is no doubt that women, people of color and queer folks are going to lead this charge because we have not held the power historically and what we are doing has not been working.

So tag. You’re it. You are the one we’ve been waiting for.

You get to step up with solutions.

You get to shower the world with the love and abundance and joy it is crying for.

You get to help people rise out of the ashes of all we are burning right now.

You get to howl your song of freedom and democracy.

You get to be in your full power because nothing less will carry us through this.

We have no time to play small, shrink back, crumble to pieces or defer to those with their hands on the trigger.

We need your Rosie the Riveter. Bring her out!

You get to reach deep inside yourself in this very moment to see what in you is not working and gets to go.

And what parts of you get to come out to play and take our world to the next phase.

Where can Rosie fill the gaps and lead this world where it needs to go?

This next phase is based in community and interconnection that brings everyone along.

A world where we dismiss the competitive approach that keeps us in a winners vs. losers paradigm.

A world where no one starves and everyone has healthcare and their basic needs met.

What do you envision for our world as we come through this season of death?

What do you want to grow after the winter is over?

Those very things you want to see, you get to cultivate in yourself right now.

What are you cultivating?

I’m going to lead an unbelievably potent group of women through a process of rebirth at Fire Woman Retreat in just two weeks. We will look deeply at what has not worked and get very clear about what is now needed in you. Then we will fortify you with tools and precious support so you can go be Rosie.

We will call ourselves and each other forth. Because women will lead us out of this so that everyone gets a seat at the table.

Space is limited so hold your spot today.

See you at Fire Woman.