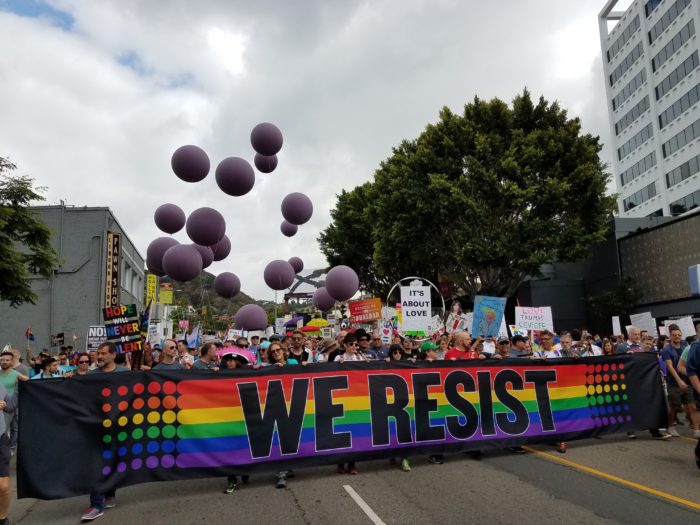 As we head into the last holiday of 2017, I wanted to send you my year-end sexuality review. This was a doozy! Enjoy the read and the links and let’s bring in 2018 right. We’ve got a world to improve and sexual agency to claim.

There is certainly no shortage of sexuality news for this 2017 year-end review. 2017 was a year that started with the inauguration of a proud non-consensual pussy-grabber as the new US President, followed immediately by the largest worldwide protest ever by women and people of all genders who were outraged and knew this did not bode well. Washington was flooded with millions of pussy hat wearing women and supporters in the biggest inaugural resistance ever.

Orange Julius delivered: he spent the year attacking the media, all of the women who have accused him of sexual misconduct, transgender people, gay folks, people of color, the North Korean leader, the UN, women in congress, Democrats, ObamaCare, veterans, the FBI and its leaders, and people in his own administration who disagree with him. But let’s stay focused.

The Flood, At Last

Little did we know that having an admitted sexual-harasser as president would help open the door for women, with the aid of good journalists willing to talk about this issue, to finally say “Enough” and bring the massive sexual harassment problem we have out of the closet. It was over 25 years ago that Anita Hill testified about being sexually harassed by Clarence Thomas, and was discredited as the issue was basically laughed at by congress. At last, we have circled back: 2017 became the year of #MeToo and the Weinstein Effect. Sexual harassers are finally paying for what they have done by losing their jobs, their reputations and some of the clout and power that allowed them to behave this way in the first place.

We will forever remember 2017 as the year of the #MeToo movement, a year when women raised their voices and pushed back.Tarana Burke started MeToo ten years ago and it took that long for it to root with the advent of the hashtag. This year it was no doubt supported by high profile cases like Bill Cosby, Roger Aisles, Harvey Weinstein, Kevin Spacey, Bill O’Reilly, Matt Lauer and countless other cases that have continued to roll out, and stars like Ashley Judd, Taylor Swift, Rose McGowan and many others speaking out. Even Time Magazine’s Person of the Year was “The Silence Breakers.”

victims of harassment to come forward and that especially in places like Capitol Hill, the barriers to reporting are so dense that it has allowed harasser after abuser after harasser to get away with wildly inappropriate, sexist and violent acts towards women.

Even the Catholic church is being pressured to end their compulsory celibacy rules for priests in order to allow their clergy a sexual outlet in a move that they hope might stem the tide of the rampant sexual abuse in the church.

To date, 4 congressmen have stepped down from their posts, yet nothing has occurred with strong calls for impeachment of the president with a mounting number of accusers, nothing has happened to perhaps the most audacious harasser of all.

A deep misogyny and system of control of women has been exposed. Perhaps we need a rule stating that any man asked to step down due to his history as a sexual harasser be replaced by a woman or a trans/non-binary person. This is not to say women do not ever act as assaulter, but we know a huge part of the problem is the lack of political and economic power women have. The wound has only just been opened and how we will heal it is yet to be seen.

It was a terrible year for moving the clock forward into the modern world for trans and non-binary (not male or female) people. Orange45 rescinded a protection that President Obama put in place for trans students that required that bathrooms be made available for them in schools. The bathroom battle rages on while students in our public schools continue to feel unsafe and unable to use the toilet during school hours in the most conservative parts of the U.S. Then Orangutan unilaterally banned trans people from serving in the U.S armed forces, a move that thankfully was quickly blocked by a federal judge.

We have had record high violence against transgender people, with the biggest number of murders of trans people recorded to date in 2017 in the U.S. This is a clear indicator that amid a cultural backlash that takes aim at transgender people, and with a commander in chief who actively works to erode hard-earned rights for trans folks, that this might increase transphobia or the brazenness to act on it. We have serious work to do in 2018 to protect people of all genders and to put protections in place that will keep trans people safe.

In October, one shiny bright spot and a huge win was that California passed the Gender Recognition Act, recognizing three genders on official documents. The state of Oregon and Washington DC also have created a third option of X on driver’s licenses and official documents. New York has pending legislation, and more states are bound to follow suit. Finally, people who are non-binary or transgender will have some legal protection to avoid barriers and discrimination when needing to use their identification for legal purposes.

Intersectional Feminism in the Spotlight

white supremacy rose to the surface with a leader who never minces racial slurs and rampantly uses semi-cloaked language about the romanticism of a white America that never was. The killings at the KKK rally in Charlottesville showed us just how deep this divide still is and how Black bodies are devalued. The Women’s March on Washington was called to task about its focus on white feminism. Mainstream conversations about the interconnectedness of race, class, sexuality and gender became far more sophisticated. We have a long way to go, but the term “Intersectional Feminism” originally coined by Kimberlé Crenshaw in 1989 is becoming one that more people understand and are thinking and talking about, which can only lead to progress. Check out Crenshaw’s TEDx talk here.

The Sexual Pioneers We Lost

pioneers died; both created a sexual conversation that changed something for us all. In early September, we lost feminist Kate Millett, who wrote a bold treatise Sexual Politics in 1970, which heavily influenced second wave feminism and with it, she brought sexuality into the gender inequity discussion in a way no one else had. The book is still a classic text, and with its critiques of many male authors and artists of the western cannon, was highly controversial and heavily criticized.

Later in September, Playboy of the century Hugh Hefner died, prompting debate about whether he was a sexual pioneer or objectifier of women. Certainly, he could be both. As the creator of Playboy, and a pioneer of modern pornography, he was a huge advocate for sexual liberation and freedom of expression, and was also politically active throughout his life. Whatever people’s opinions of him, he created a sexual empire and fantasy world that was certainly unmatched.

Fashion spotlighted the vulva boldly and delightfully as a Berlin-based design house, Namilia, was inspired to create a whole line of vulva fashion based on a 1748 novel, The Indiscreet Jewels by Denis Diderot in which a man’s jeweled ring could make women’s genitals talk and allow him to learn their secrets. “My Pussy, My Choice” debuted for Fashion Week in New York and included vulva shoes, sleeves, and gowns, as well as mermaid fashion and seemed to make statements about access to women’s bodies with colorful, daring pieces.

It’s easy to get wrapped up in the sexual assault cases and sex-negativity so here’s an article about feminist artists making art about sexuality in 2017, with some of their herstory, including Carolee Schneemann, Betty Tompkins, and Judith Bernstein. “NOW, 50 YEARS after these women began making work, the culture has finally caught up to them,” reads the NY Times. They have taken brazen approaches to sexuality and the body, it’s more crass sexual functions and secretions and have created in-your-face art that was rejected for decades. These women, now in their 70s, are finally being recognized for their work.

It was a big year for film and television stories from all but the straight cis male gaze. There were so many films about women, lesbians and queer folks that blew away the typical tropes that keep women in disturbingly limited roles. Hidden Figures and Girls Trip, two films about black women, baffled all the skeptics and almost broke the box office. Wonder Woman blew away any myth that a woman superhero would not garner attention and sales at the box office. And a behind-the-story look at the creator of Wonder Woman had a major motion picture about a polyamorous triad in the mainstream with Professor Marsden and the Wonder Women. Even Star Wars ended up centering female characters and people of color while disrupting the standard ‘white male hero’ narrative, prompting both fan backlash and a lot of popular credit.

Women and queer folks continued to take up airtime with programming in the new viewing economy. Lena Waithe became the first black woman to win an Emmy for writing on a comedy series and gave a moving shout out to her LGBQTIA community: “The things that make us different, those are our superpowers. Everyday when you walk out the door and put on your imaginary cape and go out there and conquer the world…because the world would not be as beautiful as it is if we weren’t in it.”

And sex work was depicted by female filmmakers in many films and series this year. The Handmaid’s Tale, based on the book by Margaret Atwood, Jane Campion’s Top of the Lake: China Girl, to Harlots and The Deuce, women and queer writers, researchers, producers and directors are creating works that treat sex work with the nuance and variability it deserves. At last, perhaps the puritan American approach to sex work as a problematic ill rather than an empowering and necessary part of our sexual landscape will die, as stories offering the complexity about economic agency, sexual commerce, and all the ways people choose or wind up in sex work are depicted with humanity.

And The Two Biggest Highlights of the Year Were…

There are two end-of-year highlights that must be underlined: First, pedophile Roy Moore, the GOP candidate for Senate out of Alabama was defeated by (gasp!) Democrat Doug Jones. Right up until this writing, Moore was contesting the win and Alabama has declared it official. It’s the first time a Democrat was elected in decades from Alabama. What was starkly appalling was how many white women ignored all of Moore’s accusers, discredited them, disbelieved them and actually voted for Moore. In contrast, 98% of black women voted for Jones, clearly showing why moves to suppress the votes of people of color have been so pervasive: The white patriarchy might suffer. White women will ignore violence against women in order to benefit from the patriarchy. Let this win bode well for the 2018 midterms.

And finally, Merriam-Webster Dictionary’s Word of the Year is

“Feminism.” Followed by “Complicit.”  Amazing how a word or two can tell the tale of our whole year. As the world turns its attention to the unequal treatment of women and girls and as we continue to raise our voices and claim our power, may we all find empowerment in feminism as we continue to evolve our gender, race, sexual and class consciousness. We are going to have to because there is a war raging on all of us who do not fit the cis-white-hetero-male box—and we are all biting back.

Use your voice. Vote. Run for office. We are changing this world.