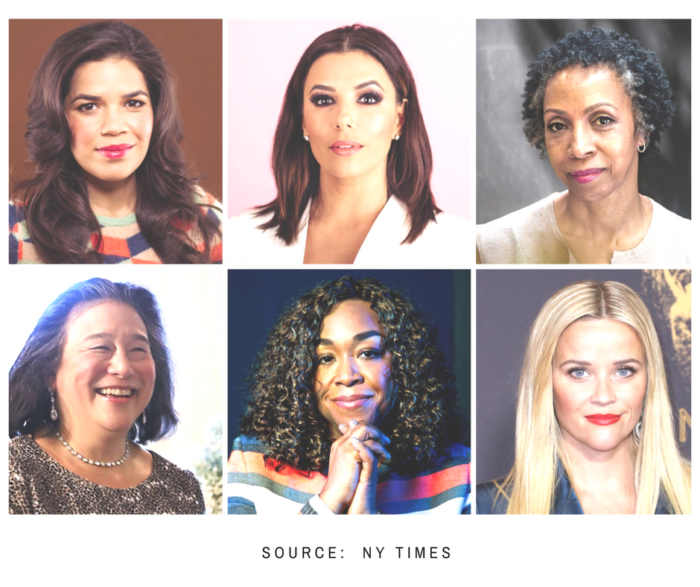 That’s what a group of over 300 Hollywood actresses and executives said in a bold
statement they put forth this past weekend, as the new year dinged in. At last, as countless victims of harassment, coercion, rape, and exploitation have spoken out and said, “Enough,” it feels like the solidarity of women and those who stand with us has brought us to the tipping point. Sexual harassment and the abuse of women will not be tolerated and time’s up on a lot of things we are no longer willing to endure.

Time’s up on men in powerful positions who make sexual demands that belong nowhere in the workplace, and which are never a woman’s job to meet.

Time’s up on a status quo that silences women and teaches us that we will not be protected and that men who bring in dollars will, regardless of how harmful their behavior.

Time’s up on protecting wealthy white women with social clout or power and ignoring women who lack social visibility, money and influence.

Time’s up on doing business-as-usual as long as the bottom line is met, even when business dealings mean the safety and wellbeing of over half of the workforce is put at risk.

Time’s up on the gender hegemony that makes it nearly impossible to challenge the roles we are expected to play and the positions of power and amount of money we have access to.

Time’s up on an entire industry of movie making built on the tired, limited, exclusionary trope of “a man on a journey,” or, “three bros.”

Time’s up on women artists being told that in order to amplify our voices and promote our art or music we must use our sexual appeal, or no one will be interested. Time’s up on the figment of two genders that violently oppresses all of us if we do not fit ourselves neatly into one of two boxes.

Time’s up on minimizing the vital life and importance of black bodies, on glorifying the way they are harmed and failing to protect them as any human body deserves to be protected.
Time’s up on systems that covertly and overtly disincentivize victims of violence and harassment from speaking out and standing up for ourselves, thereby keeping the status quo in place.
Time’s up on a world that normalizes violence against women, people of color, people with disabilities, and working class people because we are thought of as less than.
Time’s up on wage gaps, gender gaps, power gaps, political gaps, and orgasm gaps.

Time to fill the gaps and create a world that represents us all, rather than a small elite percentage of us.
Time to end violence against women and all people with less power, and to change the cultural norms that have told us for centuries that this is okay.
I’ve been doing work around sexuality, empowerment, desire and relationships for nearly 25 years, and never have I see anything like this. It really is a watershed moment and the possibility of change is exciting beyond belief.

I remember Anita Hill’s hearings before Congress and the despicable way they treated her, as if she were the one on trial. It was appalling.  (If you haven’t watched the documentary on her journey, watch it!) The action she took and the leadership she showed in raising her voice and taking a stand against a very powerful man laid the groundwork for this moment and she is now leading the commission on sexual harassment in Hollywood. Sometimes we do get to see the fruits of our labor. As we usher in a new year with new norms and new approaches to sexuality, power, self-care, and the body and as we learn to speak up in a way we may never have before, let’s do some work to lay some meaningful groundwork about our sexuality and relationships so that we actually meet our own needs. The needs no one else will pay attention to or meet if we do not make them important. I know my sexuality and relationship life is absolutely essential to my full happiness, joy and expression. I’m teaching my 8th Annual Manifesting Your Best Sexual Year Yet, New Year’s rituals & workshops starting next week: Online so you can attend anywhere in the world, and live in San Diego and Santa Barbara.
I hope you want to include your sexual life in your new year’s planning—this is a trusted and true method for doing so as we look at the 7 areas of sexuality and what we want for each one.
THE EARLY BIRD ENDS TONIGHT, SO SIGN UP TODAY. Here’s to a sexual year like we have never seen, both for each of us as individuals, and for the collective as we rise up together. Thrilled & Inspired, Amy Jo