This week inarguably marked one of the most inflammatory moments of any political campaign we’ve seen in this country since Watergate. Donald Trump’s abhorrent, flippant comments about women and our bodies, and his braggadocio on-camera claims to his ability to sexually assault women because he is a “star” are the linchpin for his demise.

His racism should have been enough. His xenophobia. His calls for violence and building walls. His lack of clarity around foreign policy and what it means to work with other world leaders. His utter negation of the importance of nuclear disarmament. Proof that the man hasn’t paid taxes in nearly 20 years, and sees that as “smart” and “successful.”

Now this. It was his outright promotion of male-dominance, sexism, violence against women and entitlement to women’s bodies that finally made Americans of all political persuasions and leaders of the GOP perk up and pay attention. Because you don’t get to treat 51% of the population that way and get away with it.

Or do you? The truth is that there are countless ways in which men with power—doctors, lawmakers and other authorities—the mainstream media and many other power-holders in our culture believe they have agency over and entitlement to women’s bodies and sexuality. Donald Trump speaks what many others know better than to say aloud. I don’t think all men are like this by any means, but the chickens sure are coming home to roost.

There are countless ways our bodies are co-opted and our sexual agency is taken from us: all the ways the fate of our bodies and sexuality are put in the hands of men or anyone who does not own this body—which is everyone but the person who lives in it.

Our Sexual Agency and Bodily Autonomy are Removed When:

There are countless ways our bodily autonomy and sexual agency is removed. This list could be as long as the day. One core part of feminism and humanist movements that has never changed is that all people, especially women, are the authorities of our own bodies and no one else has the right to that authority.

Donald Trump’s comments about “grabbing our pussies” and how he can get away with whatever he wants to because he is a star were an arrogant attempt at control of women—and no doubt he has abused his power, position and authority over and over in his actions toward the women around him, whether they were a daytime soap star, a Ms Universe or an employee.

My call to you is this: Together, people of all genders must change the ill treatment of women, the constant harassment women get over our sexuality and bodies, how transgender people are given fewer rights and questioned over decisions of their bodies, the rape culture that thinks “locker room talk” and “boys will be boys” is just “normal” everyday behavior, the way medicine removes our ability to consent to what happens to us in so many ways–in birth, in pelvic exams, when we have disabilities–the list goes on. 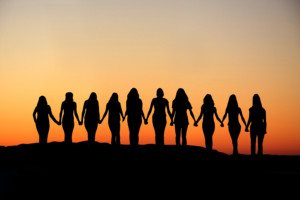 This impacts us all because this is about humanity, human rights and personal agency.

Let this moment be a wake up call to say more and do more to shift harmful, violent attitudes towards women, our bodies and our vaginas that keep letting rapists off with no or little sentence and has created a climate where dehumanizing behavior towards women is par for the course whether you are a television talk show host or a presidential candidate.

What are your ideas for what we need to do to change this entitlement climate and end this violence? Because NO ONE is entitled to your body.

Just as racism is not changed solely by people of color speaking up, sexism isn’t changed solely by the actions of women (people who have less power.) People of all genders have to get on board, and the people with the most power must take a stand.

This is a critical moment. I hope you will join me in using it to create a culture where all people can feel safe and autonomous in our own bodies.

We are circling back to finish At Your Cervix, a film about this work and the unethical alternatives. Please donate, even just $10, to help us finish it and create social change in how pelvic exams are taught so that no patient is ever disrespected by her healthcare providers again.

Want to help make pelvic exams safe, respectful and pain-free for all bodies? Donate to our campaign now!