I woke early to make myself read more of 50 Shades of Grey because I didn’t feel well-prepared to talk about it. As I was reading, what I realized was this: a huge part of why women are so in love with this book is that it plays into the fantasy of someone taking care of them, while also allowing them to be kinky as can be. Best of both worlds you say? I say not.

Women are socialized, as my friend and colleague Charlie Glickman recently put it, “never to leave the nest” (while boys are pushed out of it too quickly and don’t get the nurturing they really need). In my work with clients and students, I talk about this pattern as part of the Damsel/Princess that is alive and well in most women because we are socialized that we need to be taken care of, be paid for, be doted on, be held carefully. We can’t do for ourselves, they tell us.

Every person must undergo the developmental task of learning to take care of themselves. I think it’s a journey every woman must undergo on a deeper level because we are so socialized to “find the right man” to take care of us. Still, in 2012, father “gives” his daughter away to the next man who will care for her—because of course, she can’t for a moment, be left on her own to care for herself.

Deep down, I think many women want this. The sugar daddy. The rich husband. The rich wife. My mother married a very unkind man and continues to stay with him because she sees no other way to care for herself. She never learned how. 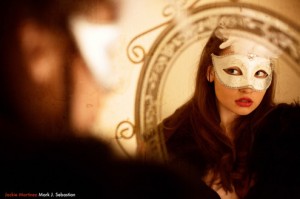 Isn't it time for the damsel to step out of her tower?

You can start with your own sexual self-care. If you can’t show up for your own body and sexuality, how do you intend that other people will? YOU must lead. No sexual father is going to lead you down the aisle to the magician who will wave his wand and make you a sexually liberated woman—or man for that matter. You’ve got the wand in your very own hand, but you forgot you were holding it.

Some people don’t know where to begin. If you’ve never had that kind of sexual fulfillment and agency, it might seem overwhelming and damn near impossible to figure out where to even start to make a dent in your metal vagina that you keep way up on the hill of the high lonely road, like Rapunzel in her castle. If your Damsel is running the show, you better befriend her and take your rightful position as Sexual Freedom Fighter back, because your damsel will sabotage you all the way into your 20 year bad marriage or 30 orgasmless years or 50 years of no sexual exploration and “WTF happened?”

I’m doing a free class next week and I hope you’ll join me because I want to see you stepping into the fullness of your own agency NOW, not later. Because I think it’s time. Don’t you?